The Thanksgiving Miracle Of Planes, Trains and Automobiles 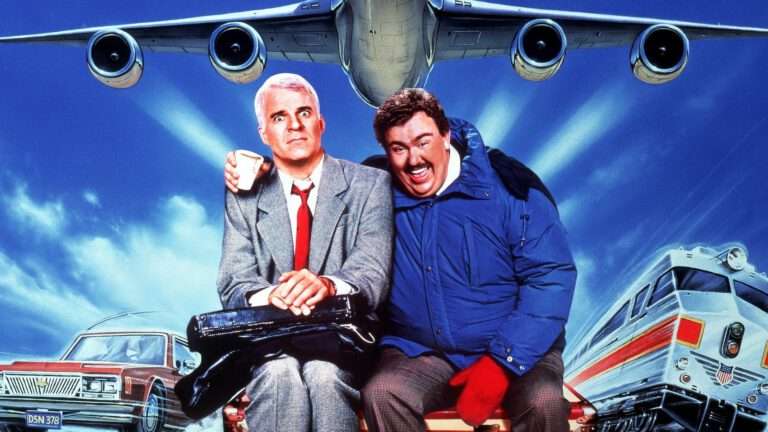 Source: Photo by Paramount Pictures under Fair Use

You can watch the trailer here.

In light of the holiday festivities, I will be reviewing one of Hollywood’s major Thanksgiving classics. It’s an old gem, for sure, but an interesting  and even an exhilaratingly hilarious watch if you have the stamina for it. The stamina to be a focused, single-minded couch potato is rare – it’s a skill that is, unfortunately, becoming less and less common in this era of Instagram Reels and TikToks . But I sacrificed myself for you guys, so you can go read an article about this movie instead of having to watch it. Win-win I would say, cause either way, I’m winning.

A small side note before I begin my analysis: the cultural idea behind Thanksgiving is noble, but the history of it is not. The traditional Thanksgiving story about the Pilgrims sharing a meal with the local Indians and living peacefully together, is a down-right fable. As many of you might know, the first colonists did not “share a harvest with the Indians,” but enslaved them or killed them, and then erased their history and culture. False accounts of what happened were created to hide this cruelty, and create a new national American identity based on propoganda. Although not an excuse, this pattern can be found in other nations as well.

The modern definition of Thanksgiving is good, though: expressing gratitude for your blessings and being aware that nothing in life is granted. In general, it’s a great way to temporarily tune down the smugness level of society and yourself. The movie that sums up this feeling the most is Planes, Trains and Automobiles. It is a critically acclaimed movie which Americans can watch on Paramount+: Paramount’s extremely successful Netflix-beating streaming service that you’ve never heard of. But don’t worry, there are other quite -cough- legal ways to see this title if you don’t own this glamorous subscription. It’s possible to rent the movie at Google Play Movies or Pathé Thuis. But one could also go captain Jack Sparrow’s way and dock your ship at the bay of pirates. All the while withstanding the wild torrents. Currents. I mean currents.

Planes, Trains and Automobiles is widely considered to be the best Thanksgiving movie. Critics appreciate the film for its honest and realistic portrayal of American suburban life. Specifically, upper- and middle-class life which are embodied by the two main characters. John Hughes, the director, doesn’t shy away from making a raw portrayal of Americans and the societal issues that always play in the background. These are things like credit card scores, problems in the airline industry, bad infrastructure, America’s dying motels, and the huge divide between countryside– and city life. John Hughes is the same guy that created Home Alone, The Great Outdoors, and Ferris Bueller’s Day Off. He took his experience in slapstick and teenage movies and the societal pressures that teenagers experience in becoming adults, to then try to make a successful movie featuring two adults, which also successfully reflected what it meant to be an American adult. And in my opinion, this in turn then also reflected how John Hughes had grown up in his filmmaking and became an adult in the process, finally finding some of the answers to what it means to be an American adult.

Other things that critics like about Planes, Trains and Automobiles, are their very relatable, human characters, and their development arc. Furthermore critics mention its ability to speak to different generations of Americans, its cultural impact on class distinction and the deep build-up that is so iconic for John Hughes movies. As Rollingstone says, “John Hughes understood that it’s all about the buildup.” In my opinion, the deep build-up is probably from the growing-up thing that I mentioned earlier, about which I’ve personally discovered that it might take quite some time, but in the end it’s really rewarding. Anyways, that’s what has made this movie timeless.

Now that we’ve had the critics’ opinions, I will give you an estimation of what the average movie viewer might find of this iconic movie. There is a well-documented gap between movie viewers and critics, that can be attributed to taste, expectations, and whether you’re willing to use up all of your brainpower to understand the movie. Although there are more movies available than ever before, Hollywood is still guilty of producing expensive movies that are considered to be average by both critics and normal audiences. There have also been quite a lot of movies that were received enthusiastically by audiences, but negatively by critics. This signifies a big gap between the two different ratings, a gap which has been well documented.

Therefore, the approval of critics doesn’t alway mean that you will like the movie too, or that you should watch it. I am aware of that. But my guess is that Planes, Trains & Automobiles is at the high-end spectrum of the critics’ ratings and at the reasonably high spectrum of the public’s ratings as well. Of course, the movie is not for everyone, and it takes some patience as well as getting used to the characters. But as the movie unfolds it becomes better and better. I think this in itself is delightfully ironic. Because the movie shows that it’s hard to stay friendly and kind to others when experiencing adversities. The story comes from a bit of a dark place, but ends cheerfully.

But in general I would say that most people will like it. Especially for our generation, it’s an interesting watch because it shows you a world without handheld cell phones, a world in which people mainly used cash to buy things like plane tickets. Ridiculous right? But luckily, one thing has remained the same: the obnoxiousness of American public transit and the relatability of the story.

I will now move on to the plot and the main progressions in the story. Therefore a small warning: there are some spoilers ahead. The movie is about a road trip and how everything that could go wrong, does in fact go wrong. It follows the story of Neal Page, a NY-based marketing manager who is portrayed by Steve Martin, and Del Griffith, a shower curtain salesman who is portrayed by John Candy. The latter character is also for a great part responsible for the absurd situations that the two find themselves in, but he is a well-meaning person with a big heart. Neal, on the other hand, is quite narcissistic and used to the privileges of the upper class. Although he does not deserve what happens to him (his overpaid cab gets stolen by Del and his Chicago flight suddenly redirects to Wichita for example), it is hard to feel for the man as he is emotionally cold and angry. Both men are leaving New York for Chicago and are trying to get home before Thanksgiving starts. But as we will learn, this is not as easy as it sounds.

Small-time salesman Del is quite witty at the beginning of the journey back to Chicago, but he can be quite annoying for both Neal and the movie audience. He stirs up especially awkward conversations as they first fly, then ride the train from Wichita but get stranded in the middle of nowhere, and then take a lift to the nearest hotel. But the second part of the movie, when the men use the bus, a rental car and a truck to get home, is more enjoyable to watch. The two oddballs go from crazy to absurd in a matter of seconds. That’s also when the characters themselves start to change. Neal discovers that there’s a generous, humble and selfless person behind Del. And Del discovers that Neal’s grumpiness and cynicism might at times lead to wiser decisions. In the movie, they experience mostly the same obstacles as the other person. But certainly in the beginning, Neal always responds in a mean, humiliating and derisive way towards Del or any other people he encounters. The friendly desk worker at the airport and Del’s cousin from the countryside will have to endure his tyrannic outbursts and sarcastic insults. During the story though, his attitude changes from being the tightly-wound guy that he is, to a more emotionally available and dependable person that accepts and gets to appreciate the goofy guy whose destiny is now cosmically tied to his.

Their journey is going to get even wilder: they drive into the wrong side of traffic under the naïve leadership of Del, who smilingly waves back at the car passengers on the other side of the road that try to warn him. They consequently survive a head-to-head confrontation with trucks, but still manage to burn down their car because of a simple cigarette butt. They proceed to rip out part of the motel that they’re staying at. All the while, they are having these absurd but very funny conversations. This culminates in the sober conversation they have with a cop, who stops them after they exceed the speed limit. Out of the wreck of their burnt-out car, Del answers, “our speedometer has unfortunately melted and it’s very hard to say with a degree of accuracy how hard we were going.” The cop pauses a moment in consideration and then asks: “Do you feel this vehicle is safe for highway traffic?” At which Del answers “Yes I do, I really do. It’s not pretty to look at, but it gets you where you wanna go.” This hilarious scene sums up the whole goofiness of the movie. The actors’ funny lines are uttered with such a dead serious conviction that you can’t help but start laughing. And this is not even the beginning! Literally of course, because as I said: the second half is the best. This scene is the perfect portrayal of how they both try to push back against the bigger obstructing forces in the story like the motel owner or the cop, but without any success. It shows how the two characters differ as they try to cope with the same situations. Del cheerfully answers the cop with his endless optimism and opportunistic view on life. And Neal’s silent but serious expression as the cop interrogates them. At this point he has accepted whatever’s coming their way and trusts Del to do the talking. He’s able to accept their fate of misfortune and can laugh about it afterwards.

Though at the end of the road – I mean rail, Neal discovers the heavy personal baggage that Del has been carrying with him. His wife, of whom he speaks so fondly as the one who ‘loves the whole package’ of him, died eight years prior and he has nobody to celebrate Thanksgiving with. Throughout the movie, he has never said this explicitly however. Del occasionally burdens people with his awkward but sincere conversations, but he is not one to burden them with his own troubles. When Neal leaves by tram on his last part of the way home, he remembers the conversations with Del and realizes that Del is actually alone. He goes back and invites Del to come with him. That’s the concluding moment of a long process in which their friendship has evolved from a forced cooperation to a warm appreciation of each other. There is the realization that they’re both changed men. That’s also when they realize they have become actual friends. And so the long difficult journey that began with not-so-great human qualities like jealousy, anger, disgust, and contempt, ends with the best of human qualities in a place of friendship, generosity, thankfulness, and acceptance. That place is Thanksgiving.